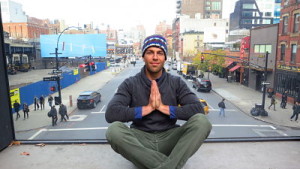 What do you love about yoga?

Yoga studios are filled with people of different ages from varying walks of life. I have developed friendships with people that I might not have otherwise met, and have learned so much from these friends both on and off of the mat. I really love the sense of camaraderie that I share with my fellow yogis.

How has yoga and meditation changed your life?

When I graduated college I had no idea what I wanted to do. Rather than taking the time to uncover my passions, I impatiently chose to adopt “socially” acceptable goals as my own. I joined the ranks of corporate America, volunteered, participated in marathons and triathlons, and even enrolled in a part-time law school program. Despite my successes, I felt anxious and unfulfilled. I was not following my dreams, but rather I was playing it safe.

I started practicing yoga because I thought it would be a great way to meet women and would complement my existing exercise regimen. Never did I imagine that yoga would be the key to uncovering my inner desires and finding my path in life. Although I will graduate from law school later this month and plan on taking the bar exam in February, I have no plans of practicing law in the immediate future. Instead, I’m planning on attending yoga teacher training in March and spending the remainder of 2014 as a trip leader for bike tours in the Pacific Northwest.

I have no idea what the future holds, nor do I have any apprehension about not knowing. My daily yoga and meditation practice has given me the ability to follow my heart, even when it leads me into new and uncharted territory.

Why do you practice at Bella Prana?

I took my first power class in January 2013. As I was walking out, Roni came up to me and thanked me for coming in. Despite struggling during my practice, her gesture of kindness made me want to come back for more. Almost a year later, Roni and the rest of my teachers continue to make me feel appreciated. They not only vocalize their gratitude, but also demonstrate it in their commitment to making adjustments and willingness to answer questions after class. Their advice and tips have allowed me to achieve poses that less than a year ago, I never knew existed.