Yoga a Powerful Way to Battle Pain and Stress 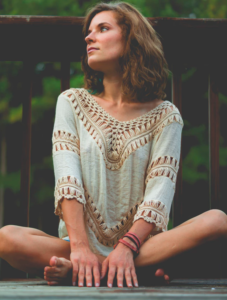 Around 77% of people in America regularly experience the physical symptoms caused by stress , while around 11.2% of Americans have experienced some form of pain daily for the preceding three months. Bearing in mind that America is also in the midst of an opioid crisis, natural approaches to quelling pain and stress are gaining ground in medical and rehabilitation settings. Among the select list of natural remedies (which include nature experiences, acupuncture, hypnosis and cognitive behavioral therapy) is yoga – a millenary Eastern practice that has been proven in various studies to effectively address and improve physical, mental, and spiritual health.

Findings on Yoga and Pain

Thus far, findings have shown that yoga can reduce chronic lower back pain and migraines. A study by York University researchers additionally found that yoga reduces the physical and psychological symptoms of chronic pain in women with fibromyalgia. Interestingly, these women also enjoyed increased mindfulness and lower levels of stress hormone, cortisol.

Neuropathic pain, common in people with diabetes and in the elderly, affects the way the central nervous system communicates with nerves. The condition can cause pain in the sensory, motor, or autonomic nerves, and can be difficult to treat. To treat the symptoms of neuropathy, important lifestyle changes (including a diet that keeps blood glucose levels) and yoga, can help soothe symptoms. In 2011, a study by Hegde et al found that yoga, combined with standard care, brought about a reduction in oxidative stress, glycemic control, and improvement in metabolism in patients with diabetic neuropathy. Another study found that yoga could restore nerve activity in patients with mild-to-moderate diabetes. A third study showed that yoga had a significant effect on nerve function.

Because stress is known to exacerbate pain, it is important for those who are already facing chronic pain to keep stress levels down. Many studies have shown that yoga can reduce stress and improve mood in a variety of groups. One 2018 study showed that yoga helped children manage stress and anxiety. Another (2017) showed that mind-body interventions such as meditation, yoga, and Tai Chi reverse the molecular reactions in human DNA which cause stress, anxiety, and depression. If the fight or flight response has an inflammatory effect on the body, yoga is able to reverse these effects at a molecular level, steering our DNA processes along a path that enhances our wellbeing.

Stress disrupts the body’s normal heart rate variability – the slight variation that occurs in the time interval between successive heart beats. Studies have shown that yoga can boost heart rate variability, indicating its ability to help the body overcome stress. Yogic meditation has been found to boost executive control: the ability to set and follow goals by relying on cognitive mental abilities.

The interconnectedness of physical pain and mental anguish reveal the extent to which natural approaches to stress should be part of our daily lives. Yoga has been found to reduce pain in specific instances but it  is also a powerful stress buster, making it a powerful ally for those experiencing illness-related stress, anxiety or depression. A positive viewpoint, greater vitality, and mental resilience are linked to better outcomes for various illnesses, and yoga can help human beings attain these goals.