Yoga as a Lifestyle 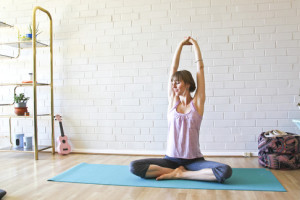 To some, yoga is an activity—a form of exercise performed largely for maintaining physical health. Though exercising for physical health inevitably brings with it positive psychological changes, yoga has the potential to transform, often directly, the psychological and even spiritual health of its practitioners.

Though there are various forms of yoga, all of them have something in common. Yogic activity acts as a bridge between the physical and the psychological: it is a form of exercise that, when performed, can lead to critical new insights. These insights, stemming from the intrinsic properties of studied yogic practice, are what encourages some to lead a yogic lifestyle.

Though the precise workings of yoga on the mind and body are yet to be fully explained, it is safe to assume that yoga’s relationship with meditation is one of its great strengths. Like meditation—when practiced sitting still, for example—yoga encourages mindfulness. That is, whilst performing yoga, one pays particular attention to one’s existence, one’s body, one’s mind and one’s relationship to the universe around them. This studied focus runs counter to much of Western society with its focus on multitasking, long working hours and the overload of information to which many are exposed.

It can be argued that yoga is a form of meditation. What separates the two, however, is yoga’s physical element. By specifically linking particular motions and poses with this sense of mindfulness, the body enters into the meditative state in a way other forms of meditation lack. Rather than negating the body (by attempting to feel ‘weightless’), the body becomes an essential component of the process. By blending the benefits of traditional meditation with exercise, yoga takes on a new status as a blend of exercise and meditation. Most importantly, however, the states of consciousness that yoga precipitates can be applied to one’s life. Yoga can, if treated with respect, become the key to a particular lifestyle.

The physical effects of yoga

To attempt to list the endless benefits of yogic activity would be an endless venture. However, one of the crucial insights that yogic activity brings is its focus on speed. As noted above, Western society in the 21st Century seems to be lived at a particularly fast pace. Yoga, in contrast, focuses on the reverse.

The deep breaths involved in yogic exercise have a profound physiological effect. These are the same tools used by those of an anxious disposition to relieve the physical symptoms of panic. There is an inherent link between the sensation of breathing deeply and the psychological states that follow. Fast, shallow breaths lead to nervous, hurried thinking; slow, deep breaths lead to calm thoughts. The added benefits of physical exercise—the release of endorphins—along with increased endurance and strength over time lead to notable benefits over both the short and long term following yogic activity. There is an even more profound way that yoga’s focus on speed can yield insights when lived as a lifestyle.

Yoga and the speed of modern life

The key difference between those who perform yoga as an activity and those who live it as a lifestyle is the application of yoga’s insights to everyday life. Whilst one is on the mat, the benefits are clear: what is more difficult to do, but which arguably yields greater benefits, is continuing to apply the skills of yogic activity when one steps off the mat.

Whilst performing yoga, one is in a heightened state. What is normally passed over becomes all-important: an appreciation of one’s existence as a biological and psychological being becomes undeniable. Far from the automatons many are reduced to in the working day, yoga leads to profound revelations of one’s inner—and social—life. For some, these thoughts are a by-product of yoga as an exercise. For others, they are the bedrock of their life.

In a sense, all continued yoga practitioners are living a yogic lifestyle: regularly performing yoga leads to an expectation and fulfillment of the particular benefits yoga yields. Applying the truths and lessons discovered via yoga, however, can radically alter one’s day-to-day life. Immediate changes may involve one’s career or interpersonal relationships; ethical breakthroughs may lead to dietary changes (such as vegetarianism); there are an endless series of potential changes yoga may have on one’s lifestyle. Crucially, most of these changes are considered by most to be positive.

It can be difficult to characterize yoga, precisely because its benefits spill into various domains. It is for this reason that yoga should be considered more than an exercise—though those who choose to consider it in this way will still benefit from the performance of yogic activity. Undoubtedly, however, the greatest benefits of yogic activity occur when it becomes the keystone to one’s existence. The regular habit of performing yoga leads to personal, social and ethical changes; these changes in turn lead to a more developed sense of sense and perhaps fulfillment.

There is a puzzle at the heart of modern society. As the use of medication becomes more prevalent, the question is this: is the reason for this increased reliance on medication a result of improving technology and our more developed science, or is it also a necessary elixir to the society in which these improvements are made? Such medicines are usually taken in an attempt to assuage particular illnesses—whether physical or psychological—but this is, in itself, indicative of a particular type of lifestyle. Keeping the role of yoga in a healthy life in mind, the question concerning modern society’s increasing reliance on chemical supplementation is whether this approach is necessary.

It is here that the importance of the yogic lifestyle has important social and even economic consequences. Given yoga’s wide range of benefits, there is an important issue to consider: could modern society’s reliance on medication (as an attempt to heal) be reduced by yogic activity (as a form of preventative care)? By adopting yoga as a lifestyle—including its focus on contemplation and living life at a particular speed—it is quite possible that by utilizing natural (as opposed to chemical) means, a fuller, richer life can be lived. Yoga can be the cornerstone of that lifestyle.