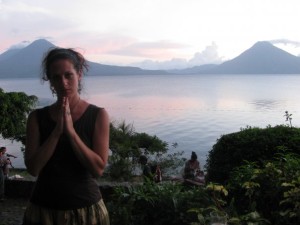 Yoga instructors, and other teachers ‘on the path’ are, dare I suggest, attached to the ever-popular concept of ‘mindfulness,’ or, ‘mindful awareness.’ We often rely on the assumption that students will know what we mean when we toss around these words, and be able to access this state on command. The truth is, the Buddha was advocating for mindful awareness, long before Eckhart Tolle or your favorite yoga instructor, though it is only in recent years that the mindful awareness fad is beginning to show up in unlikely places, like corporate workplace wellness programs, for example. If you ask me, it’s never too late for the mindful awareness phenomenon to work it’s way into the busy, often chaotic lives of modern, mainstream America, and it is certainly a welcome option from the entirely-too-common, ‘stay busy, keep distracted, and, whatever you do, do not ‘look within’ way of life.

But before you get too comfortable with the words, stop and really give this concept some attention: What does it mean to be ‘mindfully aware’? And, how can we attain this state?

After 8 grueling years as a graduate student, I was left with a daunting feeling that, even with the constant influx of other peoples’ knowledge of a subject for which I have boundless fascination, (cultural anthropology), I still felt a huge void in my life. As I began to cultivate a regular yoga and meditation practice in my final years of graduate school, and again, post-graduate school, post-children, something began to crystallize for me: the only knowledge that would give me ultimate satisfaction and release me from the clutches of something i could not easily articulate, was the knowledge that was contained within my own being. This was and continues to be, a life-changing revelation. As one of my yoga teacher friends often reminds me, ‘The key is in the cage.’

Mindful awareness should not feel like such a radical act, nor should it be cumbersome to attain, but because our society is consumed, and even obsessed, by the idea that knowledge–(the kind of knowledge we learn in school)–is the key to success, and success supposedly equals happiness, our innate ability to find peace and comfort in the present moment has become quite dull. When we sharpen our attention and assert ourselves as the master of our thoughts, we can, if only for seconds at a time, access the harmony that is contained within each of us, from birth to death, and, some would argue, beyond.

Mindful awareness is not some mystified independent stream of consciousness that only ‘enlightened beings’ can attain—it is the exact same stream of thought that is most often dominated by conditioned, ego-led thinking. There is only one awareness within. What is contained in that stream of awareness is the distinction. Mindful awareness is, simply, a shift of your attention. The key to it’s cultivation requires that we first empty our minds of the regular, ego-driven chatter, (‘I like this.’ ‘I hate this.’ ‘This smells good.’ ‘This feels bad.’ ‘She is nice.’ ‘I can’t believe it’s only Monday.’), and fill that space with attuned senses and keen concentration on the present moment. Once we accept the idea that there is only one ‘stream’ of awareness, we can then begin to practice turning down the volume on our discursive thoughts so that we can redirect our attention and begin to concentrate on the only moment that really ever exists–and that is the one right in front of us.

A teacher who was leading a workshop I attended recently, rocked my world when he put it to me this way: ‘The future doesn’t even exist,’ he said. ‘It simply can’t. When you really consider it, the only thing that truly exists is the moment that is right in front of you.’ Whoa. I already knew that, of course, but sometimes another spin on hackneyed, spiritual platitudes, can really shake the ground beneath your feet. (I will confess, however, that when spiritual wisdom is delivered to an American girl from the suburbs in a thick Indian accent, it is particularly compelling.)

You can practice ‘paying attention’ to various degrees, in nearly any activity. Noticing the flutters in your heart as your dog greets you at the front door is an easy, yet, profoundly fulfilling variation of mindful awareness. Your yoga practice is a wonderful occasion to help you develop or revisit this skill. Establishing a disciplined meditation practice, on the other hand, requires dedication, time, patience and commitment. Meditation is a radical shift from our daily buzz, so expecting that it should come easy and/or be easily sustained for more than minutes at a time, can lead to tremendous frustration and anxiety. You can work on mindful awareness as you go about your normal activities and use this practice as a pathway for deepening your understanding of meditation and building your practice. Moving into yoga postures with a deep internal focus and awareness of your breath and your body, is something that you can achieve quickly, even as a beginner student.

A good yoga instructor will remind students to come back to the breath, several times throughout a class. That is because, not only does the breath create space in the body and assist the muscles in movement, strength building, and circulation, ultimately, the breath is your mind’s anchor in your physical yoga and meditation practice. The breath is a constant reminder of the stark and uncomplicated truth that life only exists as an inhale, an exhale, and the space between the two. Everything else relies on an attachment to that which already happened (or not), or that which may (or may not) happen.

One of the foremost gurus on modern mindful awareness, is Thich Nhat Hanh, a Vietnamese Buddhist monk, who is well-received by a broad, international audience. He has several books, lectures and podcasts, all prescribing ways in which anyone can practice mindful awareness throughout the day. He suggests that we can learn to drive, shower, eat and even wash dishes mindfully. I can personally attest to the blissful experience of turning up the volume of awareness while taking a shower. Truly, it can turn an otherwise mundane act that you may not even remember once you are finished, into a blissful, aroma-filled, divine-sensory experience, including moments of sincere gratitude for the gift of clean, hot, water. I recommend you allow yourself to indulge in a mindful shower.

As the day old dishes with caked-on sweet potato pile up, not even Thich Nhat Hanh can convince me that I could or should bring mindful awareness to an act as unpleasant as washing dishes. Standing at the sink, I’ve found myself daydreaming about asking Thich Nhat Hanh if he would like to come over and mindfully wash my dishes. Inevitably, I scroll through my phone searching for someone kind enough to endure my mindless chatter, the clinking of plates and forks, and the never-ending sound of rushing water. My best friend has called me out on it on more than one occasion. “Do you only call me when you are washing dishes? Or is washing dishes the only thing you do anymore?” I have tried to gain his support by desperately convincing him that it is a little of both. He is not convinced, unfortunately, so I scroll my contacts again for another, more sympathetic victim. If you receive a call from me any day, between the hours of 9 and 11 a.m., please pick up the phone.

Here’s the thing: Mindful Awareness is a simple act, but it can also be profound and revelatory. Neuroscience and spirituality is converging these days, and there is little question that practicing mindful awareness can physically alter our brain chemistry. When we allow ourselves to really see, feel and listen to what is right in front of us—allow it to fill our senses, swell our hearts, and momentarily transport us from the ceaseless chatter to which we are otherwise tethered, we dip our toes, and maybe even dive into a boundless sea of liberation. We suddenly remember to turn a shower into a blissful experience, to listen to the symphony of the birds as we walk to the car for another day of work, to smell the complex aroma of the steam from the warm tea cup in our hands before mindlessly drinking it, to pause as the lush backdrop of trees and flowers sways against the tranquil blue sky.

And, yes, we can become mindfully aware of those things that we find too unpleasant to pay attention, for, this is also an act of self-inquiry. Getting to know ourselves means paying attention to all dimensions of our character, even the ones we’d prefer to ignore. After all, I remind myself, even the Buddha was a human being. He was advocating for mindful awareness because he personally experienced the depths of suffering that accompany the human condition. His plight was to deliver the message that freedom from suffering is contained within each of us, and the path to that liberation relies on shedding our attachment to thought so that we can learn to see, just as he did. Mindful awareness paves the way for a more compassionate, less stressful, way of living. That all being said, I also (compassionately) remind myself, in all fairness, that lucky guy was traveling so much, I doubt he ever had to attack such a menacing pile of dirty dishes.

The bliss of mindful awareness is captured in perfect words of ancient Zen poet Wu Men,

Ten thousand flowers in Spring,
The moons in Autumn,
A cool breeze in Summer,
Snow in Winter.
If useless thoughts do not cloud
Your mind,
This is the best season of your life.